I’ve spent much of the past two weeks happily immersed in a bag-full of books from the Derwent Poetry Festival (alternating with Richard Burton’s excellent biography of Basil Bunting, of which more in a future post). 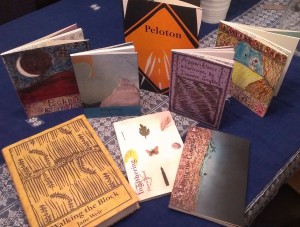 (some of my Derwent purchases)

There’s so much good stuff here to enthuse about, but I can’t resist another opportunity to fly the flag for pamphlet publishing.

I’ve written before about the advantages of pamphlets, and Templar’s Iota Shots (at the short end of the form, with 12-16 MS pages of poems) are a great example of how concentrated and vital a good pamphlet can be. There’s no room for padding or dilution. Every poem is exposed to scrutiny; every word has to earn its place – and poets who respond well to these constraints can produce something genuinely remarkable. (I should add that submissions for the 2014 Iota Shots are open till Monday 18th November, so I’d urge any poets with submission-ready pamphlets in the next couple of days to take a look here.)

The three Iota Shots I brought back from Derwent each use the short format in different and original ways. Damian Smyth’s Apparitions: a Hurricane is the most explicit sequence of the three, although Kim Lasky’s Eclipse can equally be read as a series of connected poems or a single loose multi-part poem. Sarah Roby’s This Afternoon and I is closest to a traditional collection in miniature, with some skilful variation and contrast between poems. But all three are self-contained things with their own thematic unity and coherence; shaped collections rather than strings of unrelated poems.

Apparitions: a Hurricane is made up of 48 poems (one for each of the years 1962-2010 except the year 2000). Each poem is 9 lines long, woven from three terza rima tercets with the final centre rhyme looping back to pick up the first outer rhyme (ABA-BCB-CAC) – the verse equivalent of an infinite spiral or a snake swallowing its own tail. This is a difficult form to sustain over 432 lines (with occasional rhyme-scheme variations) but Smyth keeps up a remarkable freshness and energy throughout. The momentum of each poem works with and against the constraints of the form, never allowing the form to take over. Sometimes a line reverts to tetrameter or breaks mid-word; full rhymes blur into half-rhymes; the sound-play is magnificent.

Even then they were visitors from abroad,
elderly townsfolk; hiding in plain sight
when killings began; but another breed

from the generations that lay in wait.

And here’s the same form deployed to very different effect at the beginning of “2005”:

He died under artificial light,
a shotgun muzzle pressed to his own chin
so hard it described a figure of eight

as if something had laid eggs on his skin.

The poems aren’t afraid of compression and don’t feel the need to explain everything that’s going on. The protagonists are often unclear (joined by the presiding figure of the snooker player Alex Higgins – one version of the “Hurricane” of the title), the narratives oblique. And the poems are all the stronger for it.

Eclipse points its lens at the night sky and finds a haunting poetry in astronomy and physics. Reading it I kept remembering Mirabell’s exhortation in James Merrill’s The Changing Light at Sandover (“WE WANT WE MUST HAVE / POEMS OF SCIENCE”) and lamenting how little of contemporary poetry engages with science in the congruent and nuanced way that Lasky does (built from real understanding rather than bolt-on metaphors).

Eclipse is also a sequence of love poems (or perhaps one extended love poem made up of individual science poems). At times Lasky takes some complex risks in fusing the two but the risks always pay off, as in this from the fourth poem in the book:

(Like Newton I believe apples fall
when the greenness of grass attracts).

and I fell, a ripened sphere of warm bare feet
behind my head, a curvature of spine
lined up like drying seeds on a ledge;

one-edged, one-sided, all surface,
to be continually eaten––

The Möbius strip alluded to here as a shadow-presence behind the one-sided apple recurs explicitly in the final poem of the book (in many ways a companion-piece to the fourth), which begins:

Tonight, sleepless alone,
I know I may never know why––

that the word is a question is a word
twisting on an edgeless Möbius strip
which spins us back to original sin,

the no inside the apple of knowledge
that doesn’t stop us digging our teeth in.

Repeated images weave the poems together like leitmotifs: apples, falling, gravity, questions & question marks, dark matter, the moon’s eclipse. This is a poignant, humane book that gets better with each re-reading.

This Afternoon and I made me laugh out loud, although much of its humour is of a deeper, subtler kind. Roby has a talent for taking the eclectic and the absurd and fusing them into sparkling, original poems – as in the following stanzas from “African Queen”:

This afternoon is sharp as light and holier-than-cat;
its angles drawn to a missionary’s chin that rests
its point on my shoulder. I shrug and smile

at its cartoon natives – the bright whiteness
and conspicuous hurry, the blood-sugar plunge –
and stare back into technicolour, when it was new.

There’s a seriousness underneath the dazzle, although it’s a seriousness that never takes itself too seriously. The opening of “Fantasy” keeps you guessing for several lines what type of poem you’re reading:

On head repeat:
a soldier, an arm lost
and running in the sun.
Where did pain and fantasy
first meet?

The poem then shifts through “a slow, Bovary afternoon” to the ambiguous and strange

On paper:
Rossetti’s fetish for low-slung fruit
and dwarves; mine for men-in-uniform
and melancholia;

Part Goblin Market, part tongue-in-cheek metapoem (ending with the poet “hunching, / hair dripped, over white paper”). These are poems that won’t let you relax into any single consistent tone or register, constantly reminding you that either can shift in a line-break.

Measured by page extent, if you added these three pamphlets together they’d just about equal a single slim volume (and even then at the slimmer end of slim). But measured by the quality of the poems they contain and their coherence as books in their own right, a lot of the full collections I’ve read this year would look thin by comparison.