Over the past two days poets and poetry-lovers from around the British Isles and beyond have converged on Masson Mills for the 2013 Derwent Poetry Festival. The converted mill on the banks of the river Derwent is an ideal venue for a poetry festival: spacious, scenic and unpretentious – perfect for Templar Poetry’s excellent line-up.

Alongside guest readings, book launches and lectures, there were readings from around twenty of the fifty poets featured in Templar’s 2013 Anthology, Peloton (published last Friday).  This added a wonderful communal atmosphere to the festival: audience members from one event became participants in the next, and the headline big names happily stuck around to hear the anthology readings (something that I can’t imagine happening at many festivals). On top of this there were children, pensioners, Stanza poets and passers-by, along with those rarest of poetry lovers who read the stuff but don’t write it. 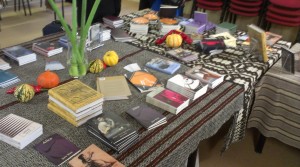 Templar boss Alex McMillen opened the festival on Friday night with drinks and a reading by the wonderful Paul Maddern (who then metamorphosed into the festival photographer). Jane Weir gave a fantastic Saturday morning talk/reading that combined poems from her books Walking the Block and Spine with the life stories of their subjects, the modernist textile printers Phyllis Barron and Dorothy Larcher. Michael Woods zoomed us in close on a few stanzas of Hopkins and showed us some of their intricacy and craftsmanship (before reappearing later to open the evening reading with some excellent poems from his own Absence Notes).

The main guest poet was the brilliant Damian Smyth, accompanied by storm, sleet and distant fireworks as he reminded us that it was All Souls’ Night, when traditionally the dead return (as they did in his unsettling and wonderfully-musical poems).

There were three strong collection launches. Dawn Wood gave an engrossing reading from Ingathering (the title coming from a remark by Geoffrey Hill that poetry is not a spilling out but “an ingathering”). Matt Bryden was both funny and poignant in poems from Boxing the Compass (and also winningly humble, even if one poem he claimed to be “weak” was anything but). Beatrice Garland read some beautiful poems from The Invention of Fireworks (the title poem in particular is wonderful).

The festival also saw the launch of a pamphlet (Robert Hodkinson’s Malvern Gibbous) and two Iota Shots short pamphlets (Kim Lasky’s Eclipse and Sarah Roby’s This Afternoon and I, both reading very well – and Roby’s aside about Margaret Thatcher was one of the comic high-points of the festival).

It’s hard to single out particular poets from the anthology readings because part of the enjoyment was the variety and contrast. Caroline Gilfillan rose admirably to the challenge of being the first anthology reader; the excellent Josephine Corcoran got a spontaneous round of applause for a powerful poem about the Stephen Lawrence murder; Frances Galleymore and Mark Carson were particularly strong on the Saturday, as were David Coldwell and Rachel Spence on the Sunday; Jessica Traynor (whose first collection is due from Dedalus Press next year) read some fabulous poems on both days. Like many people I enjoyed the range of reading styles, from Susan Taylor’s dramatic delivery to Marion Tracy’s quiet poignancy. And Simon Williams’s chess-playing chimp will stick in the memory for a long time. In the midst of this I read two of my own poems from the anthology (Saturday) and two more recent pieces (Sunday). It was a real pleasure to read in such talented company (and if I haven’t named everyone here it’s for lack of space rather than lack of appreciation).

The Derbyshire Stanza group joined the Sunday morning reading, as did some of the poets who’d taken part in the festival workshops.

Overall it was a fantastic experience. This is how poetry festivals ought to be: creative, supportive and above all filled with excellent poetry. I raided the festival bookshop three times over the weekend and still wished I’d had space in my bag for more. Templar’s list is absolutely first-rate (as are their production values: beautiful books filled with powerful poems). Thank you to Alex McMillen and everyone else who made it such an enjoyable weekend.