Kat Peddie’s Spaces for Sappho, hot off the press from Oystercatcher, is impossible to categorise (and only an idiot would want to). The pamphlet’s 21 pages contain a mercurial mix of translation, versions, original poems and responses to other translations, all converging on the mysterious absent centre of the historical, textual Sappho. The effect is unsettling, vibrant and seriously moreish. 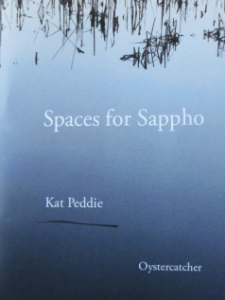 Ian Brinton, in his incisive review of Spaces for Sappho on the Tears in the Fence blog, references Hugh Kenner’s The Pound Era and its memorable chapter on Sappho, textual lacunae and the centrality of both to early modernism. Existing only in decayed scraps of papyrus and quotations in later authors’ work, Sappho’s poems tempted the early modernists with a historical analogue for their own experiments: fragmented, luminous, often impossible to resolve to a single meaning, and rooted in an unstable historical tradition.

Since Pound and his contemporaries first got excited by manuscript transmission, Sappho has been reimagined and re-appropriated in a continuous protean loop, accompanied by a perpetual crop of new translations ranging from the bloody awful to the seriously brilliant, with Anne Carson’s 2002 If not, winter many people’s (and my) current favourite.

Kat Peddie’s pamphlet engages with this context dynamically and brilliantly, and takes some bold risks that come off to impressive effect. Where most of Sappho’s poems now only exist in short fragments, a handful (also the most frequently translated) come down to us as longer runs of stanzas or even complete poems. Peddie opens Spaces for Sappho by taking one of these, the famous fragment 1, and reducing it to a single line — in effect reversing the tradition of filling-in lacunae to make coherent poems, and instead deconstructing a complete poem into a fragment. So we open with:

Who is it that wrongs you this time Sappho?

doing duty for the 28 lines / 7 stanzas of the extant poem. To put this in context, Page duBois devotes an entire chapter of her excellent Sappho to analysing this single poem. But the better you know the original, the more nuanced and effective Peddie’s reduction becomes. This line is spoken by the goddess Aphrodite to Sappho during a previous encounter, retold in the poem as part of a supposed invocation for Aphrodite’s help with Sappho’s current love affair. “This time” is an embellishment, but a perfectly-judged one. All the apparatus of divine visitation disappears, leaving a one-line question that can be read in pretty much any tone of voice you like, from weary sufferance (this keeps happening) to reassurance (this keeps happening) to indignation. At the same time, wrenched from its original context, the line stands as a rebuke to the modern translator, modern interpreter or modern reader, all of whom must inevitably “wrong” the unknowable Sappho and her lost original poems.

Peddie similarly fractures the extant and coherent fragment 31, today perhaps Sappho’s most famous poem (either directly or via Catullus’s later Latin version), and riffs on it three times in separate poems and again as a mash-up/reprise with fragments 125 and 102. The original is so familiar that its startling imagery is often lost in modern translations, but here it strikes us with something like its original force:

In between the poems that engage with specific fragments, original poems tackle aspects of Sappho’s work and myth, and the reception of both. “Sappho in Early Modern England” generates an electrical charge from the contact of the rareified word “fricatrice” with the demotic “rubster”; “0” (the title a kind of non-fragment or anti-original) pushes our anglicised pronunciation of “Sappho” against the harsher ancient Greek “Psappo” (the “ph” of “phi” being closer to a plosive “p” than a soft “f”).

In her version of fragment 74a, Peddie interpolates her own three lines (“flock in empty space / obscure / relation to”) into what is otherwise an exact replica of Anne Carson’s translation of the same fragment (down to the placing of the “]” brackets to represent MS omissions), itself a fragile balance of the two words “goatherd” and “roses”. Part homage, part commentary, part intertextual game, this is one of those “wow” moments that occur rarely in most full-length collections but abound in this slim pamphlet.

The book’s dedication acknowledges its debt to Anne Carson, but also references η καλυτερη τεχνιτης — more or less an Ancient Greek analogue for Eliot’s “il miglior fabbro”, indirectly alluding not only to the modernist tradition for which an evolving version of Sappho was so important, but also (at two removes) to Pound’s first attempts to turn the fragmentary nature of Sappho’s extant work from a scholarly impediment into a conscious aesthetic strategy.

If all of this makes Spaces for Sappho sound like a kind of tricksy puzzle for late modernists and lapsed classicists, pretty much the opposite is true. In twisting, commenting on, playing with and recombining Sappho’s extant poems, this pamphlet comes as close as anything in English to doing the impossible, i.e. transmitting something of their energy, beauty and strangeness.