I’ve spent the weekend re-visiting the most recent collections by the six poets who’ll be reading next week in Oxford, on Tuesday 22nd October at the Jericho Tavern (full details here). 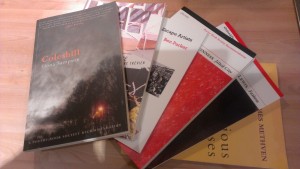 I’ve previously enthused about Fiona Sampson‘s Coleshill (in June) and Claire Trévien‘s The Shipwrecked House (in July); both books continue to surprise me even after multiple re-visits. Ben Parker‘s The Escape Artists was one of the smartest, sharpest debut pamphlets of 2012 (and John Field’s review is spot-on). I’ve been spending a lot of time with Jenny Lewis‘s Fathom and it just keeps getting better; few poets have Lewis’s ability to judge the tone of a poem so precisely. Patrick McGuinness‘s Jilted City has been one of my favourite collections ever since I first peered into it on the bus home from a memorable evening at The Troubadour in 2010; a dazzling, multi-layered, humane book. I was fortunate to see James Methven‘s remarkable Catullus poems take shape over several years until the prizewinning Precious Asses was published in 2009 (and you can sample one of them here).