Over the past few years Peter Hughes has been publishing versions of Petrarch’s sonnets in concentrated pamphlet-sized bundles from a range of different small presses. I’ve been immersed in these for several weeks now with increasing enjoyment and admiration. I took Snowclone Detritus (Knives, Forks & Spoons Press, 2013) on a recent work trip to America and had already decided to post a close reading of one of the poems when, yesterday morning, the just-published complete collection from Reality Street, Quite Frankly: After Petrarch’s Sonnets, dropped through the letterbox as the first installment of the 2015 Reality Street supporter scheme. 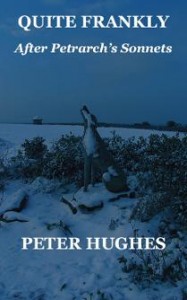 The poem below can be found in both Snowclone Detritus and Quite Frankly, and is reproduced here by kind permission of the author.

Even before we engage with the content of this poem there’s a lot going on around the edges. Whether we come across it in the Knives, Forks and Spoons pamphlet or the Reality Street full collection, we’ve opened something from a press known for taking innovative risks and championing top-quality experimental writing; we see that the author is Peter Hughes, who neither in his role as editor of Oystercatcher Press nor in his own writing could ever be called a prisoner of convention; the poem is unpunctuated, shuns capital letters and takes a flexible approach to syntax and grammar (in at least some of the possible readings that exist alongside one another). We clearly ain’t in the post-Movement mainstream.

At the same time, the poem is a sonnet. Not an irradiated, vibrant, fragmented experimental nearly-sonnet, anti-sonnet, para-sonnet or meta-sonnet of the kind that burst from the pages of The Reality Street Book of Sonnets, but a fourteen-line octave-and-sestet sonnet with ten syllables in every line. And not just a sonnet, but a version of Petrarch’s sonnet 98 / 123; a refashioning of one of the ancestral sonnets in the sequence from which pretty much every sonnet in the English (and any other) language is descended. There’s a tremendous tension between the poem’s traditional genotype and innovative phenotype, and this tension throws off an almost-continual sense of energy and urgency. Much as I love what some poets can achieve by radical deconstruction of the sonnet form, there’s a shiver-down-the-spine brilliance to Hughes’s versions of Petrarch that comes from being so close to the original and yet so dramatically different; from sticking to the rigid constraints of the form but blurring and mutating them at the same time.

The poem’s title anchors us to a specific Petrarchan ancestor that you can read in the original and in a literal translation here. The poems directly before and after this one in Hughes’s sequence (“Dicesette anni à già rivolto il cielo” and “Amore, Fortuna e la mia mente schiva”) each take the argument of their Italian original and refashion it in new ways. By contrast, on first glance “Quel vago impallidir che ‘l dolce riso” has almost nothing to do with Petrarch’s sonnet 98 / 123. Yes, individual words like “impallidir” find an echo in phrases like “a whiter shade of pale”, and the long “o” sound-world of Petrarch’s opening is picked up in “poetic snowclone” just as “dolce riso” dances around some (but not all) of same parts of the mouth as “detritus”. But the beatific visitation of Petrarch’s poem is completely absent and the ostensible subject matter bears no relation to the original.

But below the surface there are strong thematic links (at one remove, the nature of inspiration) and structurally the poems are doing similar things from very different directions. In fact, whereas others of Hughes’s poems offer a closer-or-more-distant refashioning of a Petrarchan original, “Quel vago impallidir che ‘l dolce riso” sets itself up in direct conflict with its source material.

Whereas “Dicesette anni à già rivolto il cielo” advances the sequence’s narrative through time and “Amore, Fortuna e la mia mente schiva” sets those same events in the context of future death, the original “Quel vago impallidir che ‘l dolce riso” is part of the Rime Sparse‘s manifesto rather than their temporal narrative. Hughes’s “Quel vago impallidir che ‘l dolce riso” is doing something similar, but (perhaps inevitably for a poem written not only in the wake of modernism but in the light of what the Elizabethans and their successors did with the sonnet sequence) its target is not grace or courtly love but poetry itself.

The octave takes aim at some of the less admirable trends in contemporary poetry (“snowclone” is worth looking up if you haven’t come across the term before) against which the rest of the poem sets a more credible alternative (though with tongue never straying too far from cheek). The singles chart progression from “silence is golden” to “all you need is love” via “a whiter shade of pale” is a piece of historical fact (I had to look that one up as well), but the way the poem appropriates the dead metaphor resonance of the phrases themselves is either a vanishingly-improbable coincidence or a bona fide stroke of genius.

You can parse the poem into a series of clauses and sentences that obey conventional syntax and grammar (in effect, by mentally reinserting the punctuation), but the unpunctuated flow is intentional and creates multiple alternative readings if we’re prepared to suspend strict pedantry. “Nurseries” in line 3 is technically the subject of “are one thing” in line 6, but neither the eye nor the ear interprets it that way first time through (since, until we reach line 6, it’s more natural to assume that “& chilled creative writing nurseries” is paired with “anthologies”. The final few lines say different things depending on whether we read “values” as going with “production” or as a fresh syntactic unit in its own right (since “means of production” makes sense just as “production values” makes sense, but “means of production values” is taking us into linguistically-unstable places where jellymould anthologies fear to tread. And so on.

Although this syntactic volatility is more pronounced in the sestet, it’s unmistakably there throughout the poem. And likewise for the poem’s metrical structures. Although all fourteen lines have precisely ten syllables, each line arranges its ten syllables differently: “sprinkles the jellymould anthologies” is a card-carrying stress pentameter; “of production values pedestrian” is impossible to sound naturally as anything other than syllabics; in between are lines that could be either stress pentameters or 10-unit syllabics. In fact (I’d argue) they exist as both stress metrics and syllabics until your inner ear forces them to resolve to one or the other by “sounding” them in your head – a kind of verse-form Schrödinger’s cat, existing in a metrical superposition until a reader “observes” one or other alternative to be real. The effect of this is subtly but persistently unsettling.

I’ve exceeded my self-imposed word limit and have barely scratched the surface of this wonderfully complex and nuanced poem. And this is just one out of 317 in Quite Frankly. I’m about a third of the way through a first reading of the full collection and have yet to find a page that isn’t alive with dazzling, complex, challenging, fantastic poems. If you want real poetry, buy this book.